This year our school was lucky to be one of only ten schools in Limerick to be chosen for the Artist in Schools scheme, organised by Limerick Arts office. Jeanne O'Connor, a qualified primary school teacher, is currently on career break from Monaleen National School and is pursuing acting full-time. She holds a MA in Dance Education from UL and we were very lucky that she was able to come to our school and teach dance to the Senior Infants, First and Second Classes. The Artist in Schools scheme is a collaborative project between the school and the artist. Both the artist’s and teacher’s skill sets were required to make this an enriching, meaningful and lasting experience for the children. The children worked extremely hard over a number of weeks and here are some of the fantastic pieces they created. Thank you Jeanne for all your help. The children absolutely loved it!

Our Irish Music and Dance Performances

As you all know, the boys and girls have been working incredibly hard learning the tin-whistle this year with their music teacher, Carmel O'Leary. To showcase their talents, we held an Irish music and dance concert over in the parish hall this week. If you weren't able to attend, take a look at some of the pictures and videos of the event below.

What a special day in school today, as we welcomed back past pupils and teachers, parents, and sporting stars for the official raising of our fourth Green Flag. Big thanks are owed to Ms. Murphy who put in Trojan work to achieve the flag, and Ms. Fitzgerald who continued her marvellous work while Ms. Murphy was on maternity leave. Also, a big thank you to our principal, Ms. Cleary, our deputy principal, Ms. Hanley, and all the teachers and staff in the school, along with all the boys and girls-it is through your hard work and co-operation that we have reached this proud milestone. We were very excited that local sporting hero, Donal O’Grady, could be here to share in our special day, and also to Kevin Kennedy, our Chairperson, for his support today too! Lastly to the parents who, through supporting our many Walk To School events throughout the last two years, have helped us achieve our flag also. Go raibh míle maith agaibh go léir!!

A big thank you to Ms. Fitzgerald who organised such a fantastic and successful Walk to School Day

Last week from the 9th-13th of February, we celebrated Friendship Week in Christ the Saviour N.S. We did lots of lovely activities which explored the idea of friendship.  On Monday evening, Garda Kathy Healy and Garda Pat Holland visited the boys and girls in 3rd, 4th, 5th and 6th class and Garda Healy spoke to us about the dangers of cyber bullying. We learned a lot about cyber bullying from her visit. She spoke to us about social media in particular Facebook. She said if you take a silly photo and upload it to Facebook it will be there forever. The Gardaí can retrieve photographs even if they are deleted if they are investigating a crime. She also told us to think before you post a comment and not to say something on Facebook that you wouldn’t want on the front page of a newspaper!!! You can’t put a photo of someone else up on Facebook without their permission. It was an informative talk and we learned a lot.

As part of Friendship week, Mr Keogh sold Friendship bands in aid of Amnesty International. In total €300 was collected for this organisation who are fighting for human rights all over the world.  We read a story about Ishmael, a young boy who was a child soldier in Sierra Leone. He is now a human rights activist and he wrote a book about his awful experience as a child soldier. Organisations like Amnesty International and Unicef help child soldiers like Ishmael.
Some other activities included:
The Rainbow Fish: Each class heard the story of the Rainbow Fish and watched the video of it. This showed the children the importance of caring for others.

The Friendship Fish: Every morning, each child picked a name of someone in their class out of a box. During the day, they did something nice for that child. Then they wrote what they had done on a scale, and stuck it to the school Friendship Fish at the front of the school. By the end of the week, the fish had all his scales!

Collaborative Games: The children played games that promoted co-operation and working together. They had great fun trying to make bridges, and pass hulahoops around the group!

Friendship Lessons: In class, the children talked about ways they could be helpful and respect others. They also played friendship games, such as Friendship Bingo.

Friendship Bracelets: Each student had the opportunity to buy friendship bracelets from Amnesty International, which had messages promoting friendship written on them.

We really enjoyed friendship week. We learned that in order to be a good friend it is really important to share, respect, care and be kind to all. A big thanks to Mr Keogh and Miss Tangney for all their creativeness and organisation in helping us to celebrate and enjoy Friendship Week in Ballingarry. 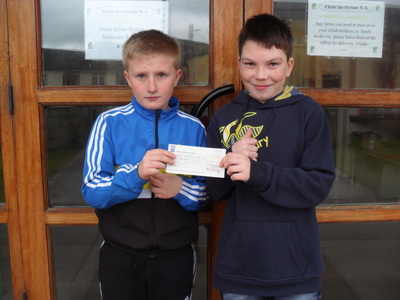 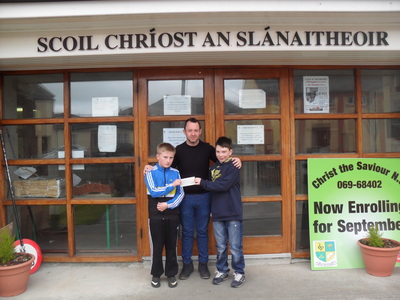 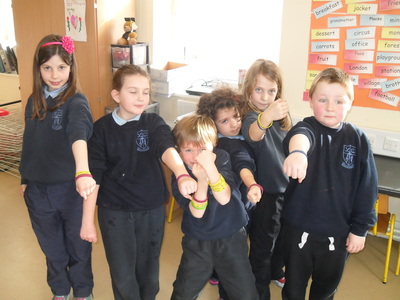 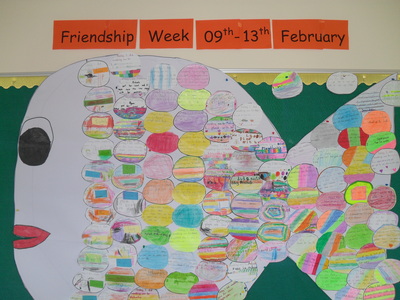 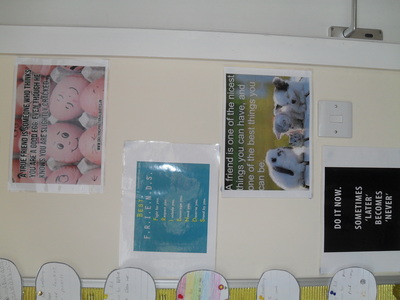 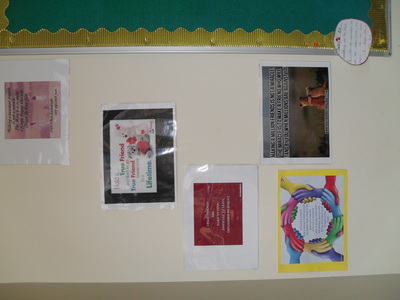 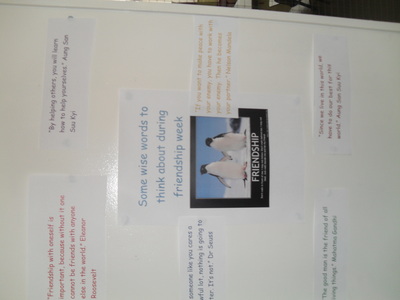 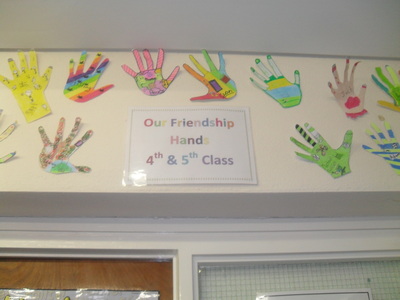 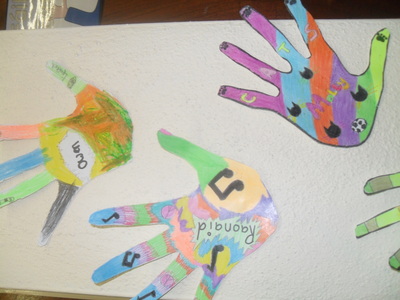 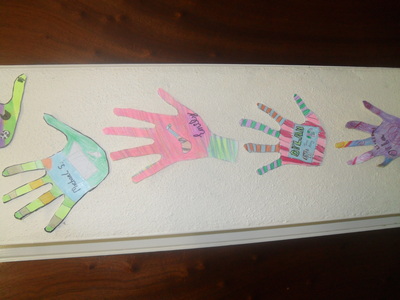 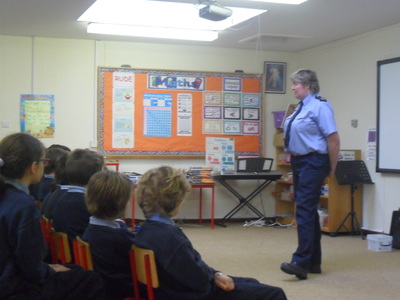 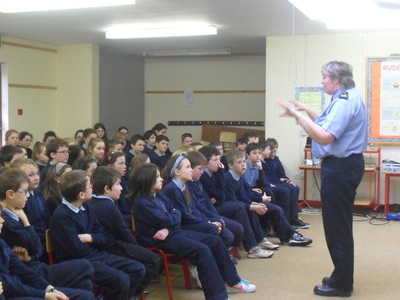 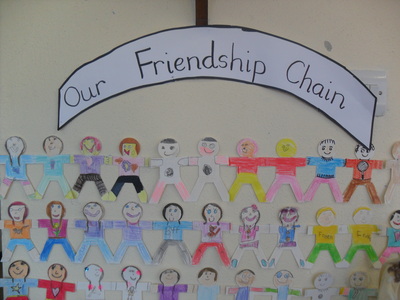 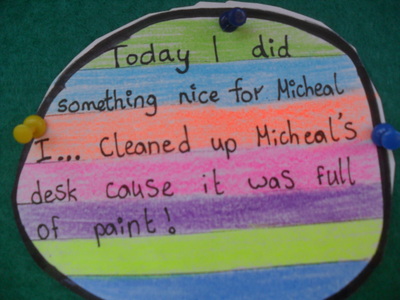 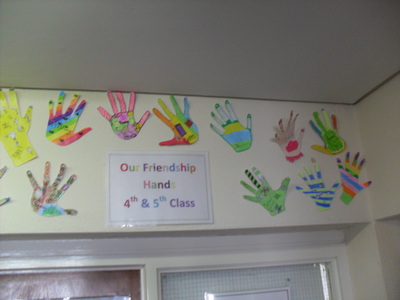 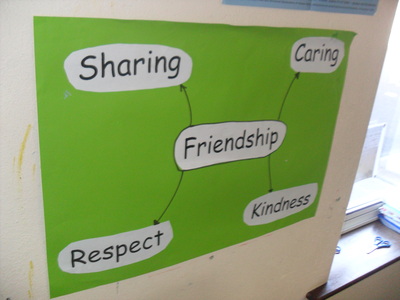 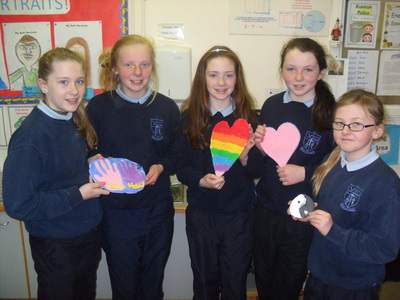 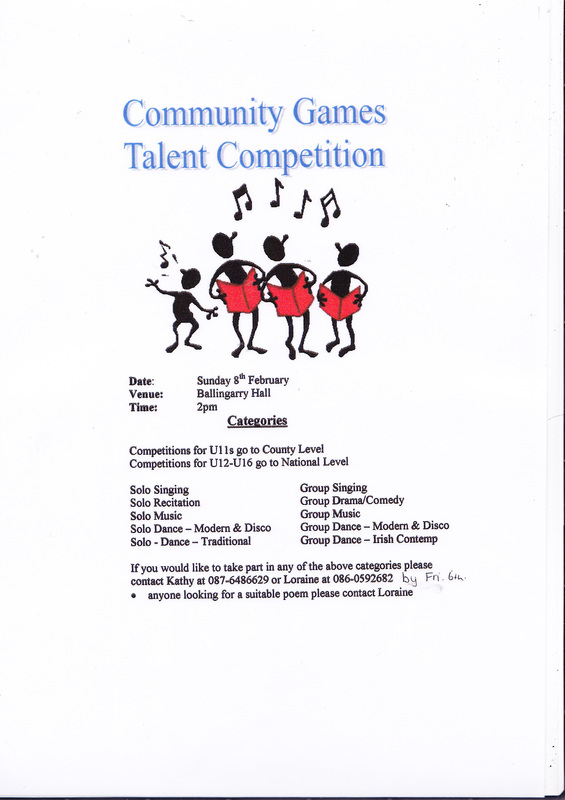 This week, from the 25th-31st of January, we are celebrating Catholic Schools’ Week. There will be many activities in our school to celebrate Christ the Saviour National School being a centre of Catholic Faith.

Some activities taking place this week include a Prayer Service in our GP room on Monday, the 25th, and Grandparents’ Day on Wednesday, 27th of January.

Also there will be numerous class based activities throughout the week to celebrate our catholic faith.

A big thank you to Ms. Fitzgerald and her class for all the preparations!

Photos from our Christmas Concert...

A Visit from Derry O'Connor...

Our Visit from Derry O’ Connor

On the 28th of November our teacher Mr. Gleeson organised a visitor to come and talk to our class. His friend Derry O' Connor, who is on the Young Munster rugby team and is also a member of the Limerick Gaelic football team would be coming in to see our class. During the week we made a poster for Derry. We wanted to learn about Derry’s sporting life and also his future prospects.The poster was full of questions that our class wanted to ask him such as “who is your favourite rugby player and who is your sporting hero”? Also some students in our class were assigned to complete a sixty second quick-fire interview with Derry. We were all prepared and couldn’t wait for Derry to come to our school.

When the day arrived, my class and I were buzzing with excitement. We were so lucky that we had a sportsman like Derry coming to visit us as he was a very busy man. He splits his time between college, work and sport. Shortly after 11:30 Derry arrived at our school. We all sang Amhrán Na Bhfiann the moment Derry walked into our classroom and he answered some questions from the poster we had made throughout the week. After that, we had planned to complete a 60second quick-fire interview with Derry. The two candidates who were doing these interviews with Derry were Ellen and Darragh. The interview turned out to be a great success and Derry managed to answer all of the questions that Darragh and Ellen had asked. Derry had brought in a blink band and signed the poster we had mad for him. The two prizes were raffled and Fiona won the blink band and I (Grace Sheehy) won the signed poster. If the day couldn’t get better we got to do aP.E. session with Derry. We played ‘rugby volleyball’ and we learned how to properly complete a ‘solo’ which is a skill used in Gaelic Football. After P.E. we took a ‘selfie’ with Derry on the schools i-pad. Overall I had a great day and would love it if Derry came into the school more often.